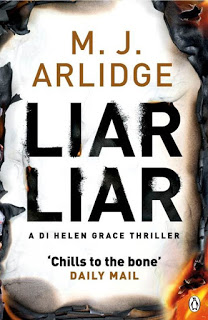 Perfect for fans of Jo Nesbo and Mo Hayder, Liar Liar showcases all the hallmarks of Arlidge’s taut and rapid-fire writing including his protagonist DI Helen Grace and the Southampton-based team. Faced with yet another ruthless serial killer, one with a penchant for pyromania, DI Helen Grace is an unwilling participant in a race against this new sadistic combatant.

M.J. Arlidge has worked in television for the last fifteen years specializing in high-end drama production, including prime-time crime serials Torn, The Little House and, most recently, Undeniable. Currently writing for the hit BBC series Silent Witness, Arlidge is also piloting original crime series for both UK and US networks. In 2015 his audio exclusive Six Degrees of Assassination was a number one bestseller. His debut thriller, Eeny Meeny was the UK’s bestselling crime debut of 2014. It was followed by the bestselling Pop Goes the Weasel and The Doll’s House. Liar Liar is the fourth DI Helen Grace thriller.

‘A chilling read’ My Weekly

‘Gruesomely realistic, intriguing and relentless. Arlidge’s fledgling army of fans is about to grow’ Sunday Sport

‘Eeny Meeny debuts one of the best new series detectives, Helen Grace. Determined, tough and damaged, she must unravel a terrifying riddle of a killer kidnapping victims in pairs. Mesmerizing!’ Lisa Gardner

‘Expertly pulled off. It has a devious premise. DI Helen Grace is fiendishly awesome. It’s scary as all hell. And it has a full cast of realistically drawn, interesting characters that make the thing read like a bullet’ Will Lavender