The Society’s March gathering hosted two very successful women authors, both providing realistic insights into the processes and practices of writing professionally.  Each in her own way was brilliantly informative and acutely inspirational.

Like many, Cathy was inspired by her early reading experiences but for her that inspiration was carried a little bit further.  As a devotee to the wonderful world of  James Herriot’s Yorkshire, Cathy determined that she too, would become a veterinary surgeon.  After qualifying, rather than treating large farm animals she found herself in the pristine confines of a clinical vet setting ministering to cats, dogs and variety of other small animals.  Not content with emulating Herriot’s professional vocation, she had ambitions to emulate his artistic one as well.  Cathy acted on her long-held ambition.  Her writing talent quickly evolved and she produced her much loved Talyton St George series. the first novel of which became one of the best- selling debuts of 2010.

As a testament to Cathy’s creative drive she changed artistic direction and moved into the genre of Victorian fiction to produce another very popular saga.  ‘Have more than one book to pitch’ was her advice when approaching an agent.  The rationale being that an agent will see you as being serious about your ambitions.  Bringing the potential to sell a series of books to publishers is an effective professional strategy.  Cathy’s experience proves that agents and publishers can be very demanding in terms of output. She related how she has been expected to work to tight deadlines to produce a book every six months.  Crucially, we were told, in order to enhance the chances of securing an agent, the first goal of any author is to make that first book as good as it can possibly be.

Cathy’s creative output continues prodigiously and she closed her talk with the encouraging thought that hard work would bring success and that being published could become more than a dream.  The idea that ‘the writers who work the hardest have the most luck’ became a theme continued by the second author of the evening. 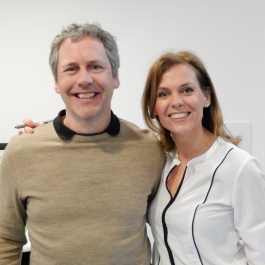 Born in Teesside into an extended matriarchal family, Adele Parks found her early domestic experiences to be fertile ground for the germination of her creative fiction.  Her childhood was rich and intriguing, full of the opportunity to eavesdrop on the machinations of conflicting and reciprocal familial relationships.  With a childhood already full of vicarious adventure, further imaginative excitement was available in her local library, a haunt that became almost a default second home.  A chance comment by the librarian that Adele might herself one day aspire to become an author set in motion a pathway into the writers’ world that retrospectively seems to have been pre-ordained.

Reading had become a means of release for the young Adele Parks, an escape into a parallel world.  The idea that writers should be the most avid readers was one that Adele was at pains to impress on her listeners.  As an English undergraduate, Adele took her own advice and devoured everything on her course reading list. She continues to be an avid reader to this day.

Like so many vulnerable writers in the early part of their development, Adele viewed writing as her own slightly embarrassing secret, but writing was to become so much part of ‘what she was as a person’ it became central to all the important decisions of her life.

Following a very challenging period she reassessed her life-goals and she found that these difficulties actually provided renewed focus for both her creative output and artistic ambition.  Her advice was that if writers don’t take themselves seriously then they can hardly expect others to do so and this realisation was the catalyst to submit a speculative ten-word pitch to literary agent, Johnny Geller.  ‘Anna Karenina meets Bridget Jones but heroine gets to live’ were the fateful words.  To Adele’s astonishment, on the eve of her 30th birthday, she got the news that Geller was interested in reading the rest of her book.  Note to self (a la Bridget Jones) finish novel before pitching to agent. Despite working flat out for three weeks, Geller could see that the new material was rushed by comparison.  Rather than walking away from the disappointment of rejection, Adele decided to re-double her efforts until the manuscript was in the best possible shape.  She reworked the POV into 1st person rather than the original 3rd (what was that she said about working hard and taking yourself seriously?) and resubmitted.  The result was that five publishing houses tried to option the manuscript and the rest, as they say, is history.

Despite her prodigious success, having already sold over 30m copies, Adele offered some interesting thoughts on what success actually means.  The only time writers fail is if they decide to quit; and that is a very comforting thought indeed.

One thought on “Adele Parks at Hampshire Writers’ Society”