Her self-administered reward at the end of a busy run is a little time away following in the footsteps of the great Poirot on Burgh Island, just off the coast of Devon where Agatha Christie wrote many of her novels.

While at home curled up on the settee on a winter’s evening, she thrives on the heartache of the heroine caught up on the ‘social perception of Jane Austin’s time’ listening to their head and not their heart. For her they are the perfect mix of romance and historical statements before being quite willingly whisked away to Pemberley.

Being Mayor is a busy role with up to four engagements a day, but she loves it and says that perhaps one day will come to Barbara Large for instruction and put pen to paper.

The audience was treated to a performance by Chris Mann, prominent South African poet, playwright and song-writer who demonstated the creative effect of combining songs with guitar accompaniment. Chris Mann is Professor Emeritus of Poetry, Rhodes University in Grahamston and is currently visiting the University of Winchester.

‘Never forget! We are in the entertainment industry.’ Della Galton told us and she doesn’t believe in Writer’s Block either.

Della draws much of her story-writing inspiration from songs or poems. It is emotion that drives her fingers. Writing Groups are invaluable and Della began attending one back in 1987. 1500 short stories later, she still goes to it. 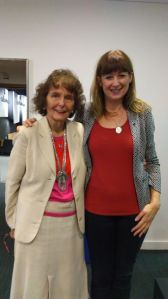 Since she started writing, the magazine short story market has shrunk. Now there are only 7 magazines that can be submitted to, with some on-line.  Successes feel great but they can be sporadic. As can the income.

1000 word stories are the biggest payers. Your readers must care about your characters. Give them a problem that is not of their own making. Make them solve it in an unusual way, but get the reader to care about them – from the first line.

Cosy crime is a big seller.

And men – do not switch off – men can write stories for the likes of Woman’s Weekly. The editors are looking for diversity, the writer’s own voice and they buy on the strength of the story not that of the writer.

Ask yourself, if you are moved by your story. Then the reader will be moved as well. And try to make the editor laugh. Della admits that this is not always easy in 1000 words. But, don’t be predictable. Or preachy. Although a twist in the tale is still a winner.

Your story needs to provide escapism for the reader.  It must also be believable – draw from your own experiences.

Persistance and patience pay off. Poor Della once had thirteen rejections in the same day! So she cried and carried on. What’s your motivation?

Don’t write what is trending! If a tsunami has recently ravished the coastline then don’t submit stories about it – the editor will receive thousands the same. And here she left us a tip – write a list of your ideas. Then cross out the top ten – everybody thinks the same way.

Della could not stress enough how important it is for a writer to carry out their market research. Magazine submission guidelines will state their taboo subjects, word count can be very strict and check the genres that they prefer to print. Your information must be current.

Della confessed to being a NaNoRebel – she uses the National Novel Writing Month as a challenge to write a collection of short stories. And she highly recommends it. In the race to keep writing, your inner editor is subdued.

For more information about Della Galton visit her website and blog.