‘Write a cover letter to a publisher’

Mary Chamberlain began by pointing out that letters would be addressed to an agent and not an editor. The agent’s role, Mary reminded us, was to find a suitable publisher for the writer.

Mary found three good entrants for this month’s competition which were each awarded a 1st, 2nd, and 3rd prize on the basis of the interest they sparked in the reader, and whether they were correctly presented and addressed.

The writers read their letters out. Gill Hollands’ second letter drew laughs from all, as the author professed to being a burglar, there were obvious spelling mistakes throughout, and it ended with the salutation: “love and kisses.”

Hermione Laake: Chair of Competitions, was asked to read Nita Saini’s letter, in her absence.

“Mary gave excellent and very thorough feedback,” said many of the attendees on the evening. 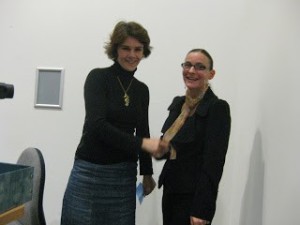 Mary stressed the importance of properly addressing your correspondence. If you do not get this right, said Mary, then editors will not feel connected to you sufficiently. “Find out about where Mary Chamberlain comes from.” Mary reminded us that agents like letters to be addressed to them specifically, by name. Do your homework on this, said Mary. “Look them up; [similarly] don’t forget your postcode as an agent will be too busy to look it up.”

Mary emphasized the importance of assertive language, stressing, “Don’t use, I believe, or I feel.” Some personal information was a good idea, and where your work would sit in the current market was also something writers should address in letters to agents.

With regard to the presentation of the letter Mary said that staples were preferable and that paper clips were not acceptable. One page was enough.

One letter with the nom de plume, Jane Austen, Mary Chamberlain found particularly intriguing. Mary put this letter in the Highly Commended category as it did not have an email or postcode. This letter was written by our very own, meticulous secretary, Celia Livesey. However, we soon discovered the reason for the lack of email and postcode; this letter was written by somebody from the past. Thus the evening not only began on an historical note, with our Pro Vice Chancellor, Liz Stuart drawing on the history of Winchester University, it also ended on an historical note, yet with a clever twist, as the historical was married with the creative in the shape of a fictional letter.