It is with great sadness we learn of the death on 9th August of the hugely talented comedy writer, David Nobbs, David entertained members of the

Hampshire Writers’ Society in May 2015 sharing with us his many humorous tips and advise for writing successful comedy.

A great loss to the world of comedy.

There is an obituary on the British Comedy Guide Website.

‘Write a comedy script for a sketch in 3 pages.’

The winning entry was performed by members of the Chesil Theatre Group.

Cecily O’Neill, a renowned authority in Drama in Education was the adjudicator for the May competition. Cecily has worked with students, teachers, directors, and actors throughout the world; leading drama workshops, speaking at conferences, and carrying out research. She said that the task of writing a comedy script was a particularly difficult one but the Hampshire Writers had risen to the challenge.

“You have taken a typical comedy format, where one actor is the straight man and the other delivers the funny lines. But within this framework you’ve cleverly subverted the stereotype of the elderly countrywoman and created an amusing sketch.”

“Within the tight three-page limit of the brief you managed to draw us into the concerns of the young couple and you achieved this as much by what was left unsaid as by the dialogue. You have allowed the comedy to develop gradually and provided an effective and believable denouement.”

“This sketch is full of lively dialogue and comic misunderstandings. The gradual build up of frustration is very well handled, and the cheerful acceptance by the parents of their son’s unorthodox lifestyle provides an unexpected and pleasing conclusion.”

“An amusing and topical take on the economy. A comedy of contrasts as 10 year old Billy demands to be taken seriously.”

“The relationship of the sisters is clearly displayed in the subtle insults they exchange at their mother’s funeral. They get their come-uppance in a surprise ending.”

The prizes were signed copies of David Nobbs’s books and a Certificate of Adjudication from Cecily O’Neill. The winning entry was performed by Mary Mitchell and Norma York of the Chesil Theatre Group, much to the delight of the audience.

On stage – two ‘older women. They speak with slow, west-country accents. Throughout the scene, using a tea set and plates: tea is poured, stirred and drunk: biscuits and cakes are offered, taken and eaten. Music to top and tail the sketch; something English and rural, like the older version of the ‘Archers’ theme for example.

Music to establish the scene then it fades.

Woman 1: They be ginger nuts, baked ‘em myself.

Woman 2: It’s the black stuff on the bottom of your frying pan.

Woman 1: There b’aint be no black stuff on the bottom of my frying pan thank you very much! I use they Brillo pads.

Woman 1: Definitely not my pans!

Woman 1: I bet the Vim gets it off; that’ll shift anything.

Woman 2: It’s compulsory: if you got a frying pan you’ve got to have the PTFE. They do call it a ‘non … stick … coating’.

Woman 1: You’ve been practicing that.

Woman 2: That’s what they do call the black stuff on your frying pan.

Woman 1: How’d you know that then?

Woman 1: What made you do a thing like that then?

Woman 2: Well, thing is, I be downsizing … getting a smaller frying pan like.

Woman 1: Your Peggy could do wi’ some ‘o’ that downsizing ‘n’all.

(After a pause Woman 2 takes a cake. There is another pause.)

Woman 2: So … I goes on-line and I finds a frying pan that suits my purposes.

Woman 1: Couldn’t you a just popped down Lakelands?

Woman 2: No; I wanted to exercise my rights as a consumer … make a choice like, from the best available.

Woman 2: I be a fan of that programme off the telly, that ‘Watchdog’. You watch it?

Woman 2: Oh you should. I learnt all about exercising my rights as a consumer and making a choice from the best available off that ‘Watchdog’.

Woman 1: I always thought it were about pet training.

Woman 2: So … after due deliberation and intensive comparison, I saw this one frying pan that do seem to fit all the criteria; one that were the best value for size, weight and the durability. I read all the reviews, you’m have to do that these days. Everyone does it.

Woman 1: Do they indeed? Fancy that.

Woman 2: So anyway, I read that it had a … ‘non-stick coating’! Well I was curious I don’t mind telling you. What’s a non-stick coating, I says to myself? And is it something I wants to be party to? So that’s when I did the googling; I looked it up on that there Wikipedia. ‘Non-stick is often used to refer to surfaces coated with polytetrafluoroethylene … P.T.F.E.

Woman 1: You learnt that off by heart as well didn’t you?

Woman 2: I likes to expand the horizons of my knowledge and add to my vocabulary whenever possible.

Woman 2: Have you got one of they computers, then?

Woman 2: What you got then?

Woman 1: I got a Macbook pro with fourth-generation dual-core and quad-core Intel processors! It’s got that Wi-Fi and Thunderbolt 2.

Woman 2: That that sounds very nice.

Woman 2: What’s that mean then?

Woman 1: Well I gotta do somethin’ ent I … what with my Albert passing over and that … thing is … my imagination’s not what it used to be. (Pause. She offers another plate of biscuits.) Ladyfinger?

The competition secretary, Jim Livesey, thanked everyone who had entered the competition. It had been a good turnout with 16 entries.

‘Write silly!’ is David Nobbs’ truth burrowed deep in the underbelly of his work. It is truth that transcends many comedies – Dad’s Army was based in the truth of the war, Reggie Perrin’s life was so boringly ordinary that he could not cope with it. ‘Your writing can have its own truth. As long as it clings to that truth, it will go a long way.’ Recognise the boundaries surrounding your chosen subject and stick within those confines.

David began his writing career at age 9 with only W.E Johns’ Biggles for inspiration. After National Service and Cambridge University, with Peter Cook, he had caught the writing bug and wrote for magazines, before moving into journalism where he wrote small articles on local issues. A writer’s first printed professional word never fails to thrill, David’s was a typo.

The world of journalism was just not doing it for him and in his evenings, he wrote his first novel. He almost preens with pride at the memory of its doing fairly well. So he relocated to London and wrote. And wrote and wrote. But nothing sold.

So, it was back to journalism.

‘Persistence can be hard work.’ he admits. It paid off though and a sketch submitted to ‘That Was the Week That Was’ was accepted.

But, David could not stop writing novels, embellishing an unassuming body with a dash of drama e.g. The Cucumber Marketing Board with Pegasus Baines, a Nutritional Scientist, Heston Blumenthal like Chef (The Cucumber Man, 1994). It is a disappointment to David that drama has been lost from satire.

‘Television is made for dialogue.’ he says. Snippets of overheard conversation on a train, in a queue, at a ‘Do’ all make for material. Much of today’s comedy has replaced irony with anger and it is a shame that so many characters are not likeable.

‘The basic principles of Comedy remain the same. It is the details that change.’ And a move to the country provided David with his hit ‘A Bit of a Do.’ People watching at a wealth of village celebrations, from the Dentists’ Dinner Dance, to the Angling Society Awards. He used his own experiences combined with the drama created by the ongoing whisperings of the recurring guest list.

As for new writers, David recognises the difficulties of facing a fast moving society that we now live in. Today’s news can be forgotten by next week. And that our current obsession with Political Correctness sweeps the stereotypes that can yield so many laughs under the carpet. Persist! Exploit the Radio Times and the TV Times and current comedy shows credits! The Agent/Producer issue is much of a ‘chicken and egg’ discussion, so keep sending your sketches and ideas to either. Or both. But funny and silly still rise to the top. 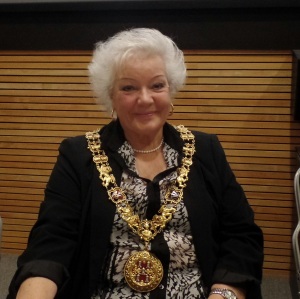 Madam Mayor Eileen Berry is a straight talking woman. It was no real surprise when she confessed to having been a rebellious writer when growing up. ‘Rebel or not – be true to yourself’ she says. ‘My writing life sustained me.’ And it was in writing that she accessed a plethora of emotions. As a little girl, she could not spell and so read a lot and read her own work to others.

‘Never apologise for your work.’ Criticise and criticism should be kept to the writers’ work and always remain constructive. In this sense, others can be listened to and learned from.

Over her past year as Mayor, Eileen has accumulated riches beyond her expectations. She has always liked people and has revelled in her Mayor’s capacity to attend groups like the Hampshire Writers’ society and to meet the do-gooders that are never seen. She has not met anyone who has not inspired her.

Madam Mayor is a lifelong poet. She was a member of the Winchester Writers’ circle and Winchester Poets.

Dr Laura Hubner, senior lecturer with The University of Winchester, was the adjudicator for our very special Gala Evening in June, which rounded off the year of competitions. Laura has been with Winchester University for 12 years. She currently supervises research students at Winchester with their research projects on Comedy, scriptwriting and Fairy Tale Horror.

Laura spent some time summarising the pieces and giving very thorough feedback on each script. However, our writers did not get off that easily, as we forced them to read their pieces, which was made all the more illuminating by Dr Gary Farnell’s (senior lecturer at The University of Winchester, and Barbara’s Right Hand Man), animating and amusing delivery of Karin Groves’ character, Barry. Anyone who has resorted to internet dating would be able to relate to Karin’s dialogue. Keep writing, Karin. We are looking forward to the book, and the film!
This month it is worth drawing attention to the very creative titles of the pieces.

Highly Commended (in no particular order)

Celia Livesey: Where There’s a Will