Barbara Large, Chair of the HWS, opened the meeting and welcomed everyone to what would be a wonderful event on a sunny evening, and pointed out although we may be at different stages of development, we were all writers. Barbara welcomed our guests: Lady Carnarvon, Professor Joy Carter, Becca Munday, and Becky Bagnall. She delivered the apologies of Stephen Lawrence and Lindsay Ashford who could not be present and thanked Ray Mosley and Keith Arscott of Chawton House for their great help in making the event possible. 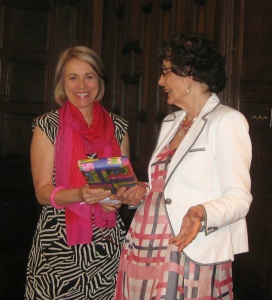 Barbara pointed out that the membership of the HWS was drawn from beyond the confines of the county, and informed us that one member lives in London and endeavours to attend every monthly meeting. Barbara then reminded the meeting of the HWS events of the past year, citing the highlights of each. She then thanked the members of the management committee, asking each to stand up and be recognised. The HWS Treasurer, Crispin Drummond, then gave a brief report on the state of health of the Society’s accounts which were, in brief, healthy; we had a strong, stable membership, revenue was good, and considered that the HWS could do even better if it were to extend its activities into the running of workshops and other activities. Barbara then ended the Society’s interim report and asked Professor Joy Carter to say a few words.

Professor carter said that it was a joy and a privilege to be present at the event, thanked Barbara for such a wonderful set of events, and wished everyone a great evening. Barbara then introduced the main speaker for the evening, Lady Carnarvon.

Lady Carnarvon greeted the members and commenced the delivery of what was to be a fascinating and at times immensely amusing presentation, supported by a huge number of projected photographs. Highclere Castle had, reportedly, been made famous in “two hundred countries” around the world, which slightly exceeded the actual number, but confirmed that the TV series “Downton Abbey” was indeed a worldwide phenomenon, loved by huge numbers of people and once amusingly parodied as “Downturn Abbey”. Filming of the series at Highclere Castle had resulted in a number of amusing production requirements, such as the use of a cupboard as a door to a bedroom. Today, Highclere had between 80 and 120 people connected with the maintenance of the building and between 35-40 people who actually run it. There were 200 rooms in the Castle, which is set in 1,000 acres, with a larger estate surrounding that.

The Castle had a fascinating history. In 749, the then estate was granted to the Bishop of Winchester, and there is an area known as the “Monk’s Garden”. William of Wykeham, founder of Winchester College, held it while in office, and there were significant developments in the Elizabethan, Georgian, and finally Victorian eras, all of which were being increasingly understood by modern archaeology. One significant modern development is that Lord Julian Fellowes, creator of Downton Abbey, is a regular dinner guest.

Lady Catherine, the subject of a book by Lady Carnarvon, truly represented the glamour of the 1920s and 30s. Lady Catherine was American, and when she married, the wedding guests comprised a few close family members – numbering 750 – and the event was followed by a party for 1,000.

The Earls of Carnarvon had traditionally been prosperous, but by the end of the nineteenth century the old, previously dependable revenue streams were drying up, at which point salvation appeared in the form of Almina, the illegitimate daughter of Alfred de Rothschild, who appeared on the scene with a £500,000 dowry. Almina was a great society hostess, but on the outbreak of the First World War decided to turn Highclere into a hospital and convalescent home for wounded servicemen, the first of which arrived at Highclere in September 1914, to be greeted by Lady Almina and her attractive troop of nurses. Almina had asked her father for £25,000 to set up the hospital and requested a further £10,000 a little later for running costs. One patient, who kept a diary, was Captain David Campbell who had served at Gallipoli and been shot in both legs. Almina concentrated on orthopaedic work. This period saw a shortage of surgeons, sixty having been killed at the Battle of the Somme alone, and many doctors and surgeons came out of retirement to help.

(On the third of August, Highclere will once more be turned into a hospital: as part of the marking of the start of the First World War. There will also be a big air show, and the proceeds will go to the Royal British Legion.)

Almina’s husband, Lord George Carnarvon, along with Howard Carter, had discovered the tomb of Tutankhamun in 1923, but was the first to fall under “the curse of Tutankhamun” and died in April of that year. On the news of her husband’s illness, Almina had been lent an aircraft so she could be with him, but sadly he died before she arrived. Death duties then hit the family, but Almina managed to save Highclere by selling many old masters.

A complicated period now followed. The sixth Earl, Henry, had married Catherine Wendell in 1922, and they were together until 1936 when they divorced. Henry, after having become engaged to Tanis Montagu, who turned him down shortly before their intended marriage, then married Tilly Losch, the ballet dancer just before the Second World War.

WWII saw Highclere providing a home for dozens of evacuee children, and cooking for everyone was a challenge for the resident chef. But danger was never far away as Luftwaffe bombers would frequently jettison bomb loads on the way back to Germany from Bristol, and Highclere was under their flight path. Tragedy also came to Highclere in the form of several crashes of allied aircraft, including a B17 Flying Fortress, and parts of this aircraft are now in the possession of Highclere.

Lady Carnarvon ended with a description of present life at Highclere, and how the people who work there rarely retire. A valet, Robert Taylor, served for fifty years, and one employee is now in his 90s.

Barbara thanked Lady Carnarvon for her absolutely fascinating talk, and Gary Farnell then handled questions from the members. One question concerned the awnings seen over the Castle windows in one WWI image, and the answer was that these were to shade sun-facing windows. Lady Carnarvon was asked how she decided what to include in a book, and replied that generally she includes, and Hodder takes out! (At this point a gentle ‘ooh’ was heard from Becca Munday, Lady Carnarvon’s agent.) In answer to the question “what next?”, Lady Carnarvon said she now viewed the interests of her readership as important, and was looking at ‘a year in Highclere Castle’: the food of Highclere and also the people who have worked there. She admitted that she had now come to know an enormous amount about plumbing and electrical systems. Asked if she kept a diary, Lady Carnarvon said she did not, but had a huge volume of emails which was just as good. Asked how she found time to write, she replied that it was indeed difficult, but it was a challenge and, if she found herself facing writer’s block, opening a bottle of champagne usually did the trick.

Barbara then introduced Sharon Garrett, who had recently published “Friday Night’s Dream: Wyckerton” under her pen name Nick Newberry. Sharon explained how she had been inspired by Julian Unthank, HWS speaker of June 2013, who had presented the ways in which a person could write for the screen. Sharon had decided that what worked for screen should work for a book, and set about reading and analysing existing fiction, and seen how internal conflict could draw the reader into the story. The result had been her book.

Jim Livesey then asked Becky Bagnall to present the results of the competition, the details of which can be seen in the ‘Competition Report’.