Edward Fennel from the Hyde900 group was the special guest at this, the 8th event in our ten event programme. He invited everyone to join six The Art of Conversation discussion evenings starting on April 17 when visual artist Anna Cady is interviewed by Jenny Cuffe [File on Four – BBC Radio]. For details of programme and other Hyde 900 news.

David Eadsforth introduced our main speakers: Christopher Reid poetry writer and publisher. He won the Costa Best Book of the Year 2009, the only poet to win this prize other than Seamus Heaney, for his anthology, A Scattering, a monument to his late wife Lucinda. Julian Stannard poet and tutor at the University of Winchester shared the platform. 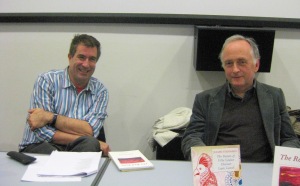 We enjoyed a number of readings. The first from Julian were set in Genoa where he lived for some time and evoked the atmosphere, deftly slicing Italian into the English. They ranged from the birth of his son, walking around Genoa and a poem about a woman he no longer loves, The Parrots of the Villa Gruber Discover Lapis Lazuli, also the name of his anthology. We listened to lunches, walked along the Burlington Arcade and sympathised with his need for a cigarette alone in the mountains with just a dog for company.

Christopher praised Julian for his comic and voluptuous spirit. He said generally his own poems were a versified, rather than a prosaic, response to grief, loss and unhappiness.A Scattering was written in three sections: the first whilst his wife was dying, the second after his wife’s death in a hospice and the final third, a widower’s dozen. He read Songbook, Dream and Afterlife and the audience were moved. He then read from his Nonsense anthology a piece about his character Professor Winterthorn – a man in search of some relief from his grief at a conference with an old student.

Julian started writing poetry as a teenager and “didn’t grow out of it” and Christopher started at eight years old inspired by light verse in The Pick of Punch 1951. Both writers prefer verse and feel that it seizes you with excellence and surprise whilst novels often don’t. Poetry gives you something to hang onto that prose cannot provide.

Christopher edits his poems as he writes and doesn’t revisit at a later date. When building an anthology he uses a yardstick of Ted Hughes [whose letters he has edited & published] which is the book needs to reach resolution and lead you to the last few poems. He does not tailor the poems themselves but uses this to determine what goes in and what order.

Brian Evan-Jones commented that Julian seems to weave humour into his work with ease and asked if he found it easy to do. Christopher thought it was more to do with Julian’s picaresque view of the world. Julian thought it was odd as he described himself as “quite a miserable bugger”!

Both poets found that publishing validated their work and Julian confessed that often he describes himself as a teacher rather than a poet as many people consider the arts as indulgent.